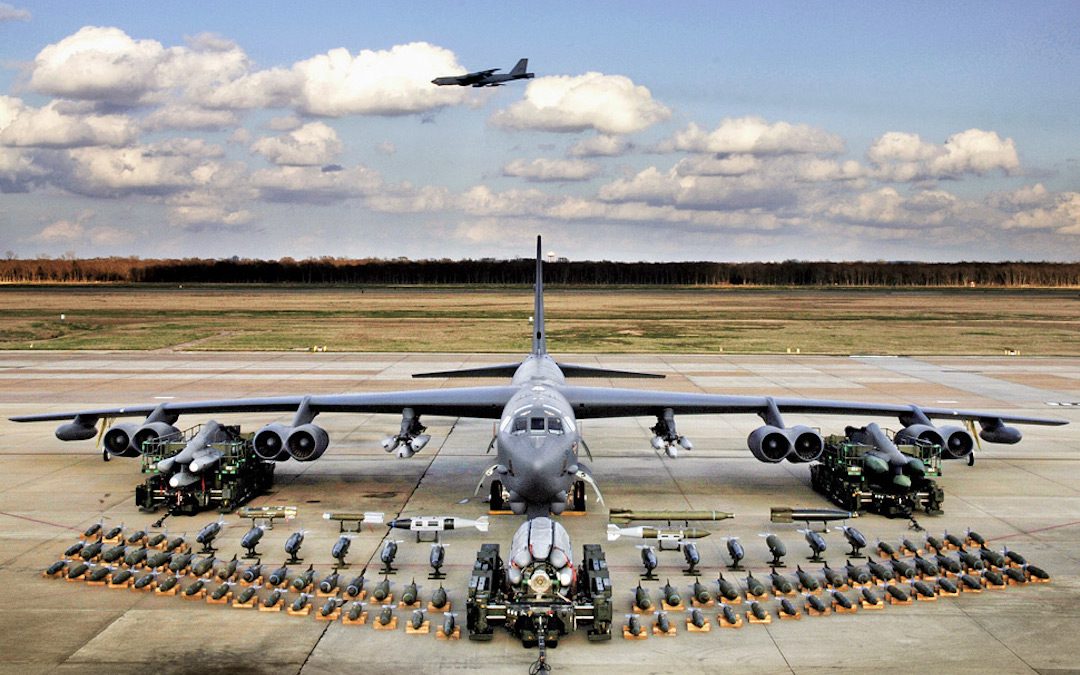 I wrote a post awhile ago spilling secrets about my days flying bombers, in particular the venerable (tr: “friggin’ old”) Boeing B-52 Stratofortress. This name is habitually shortened to the BUFF. This is an acronym for Big Ugly Fat Fuc… errr, Flying Machine. Rereading that post, I realize I never actually got off the ground, getting bogged down in the hilarity that was Cold War Bomber Alert. 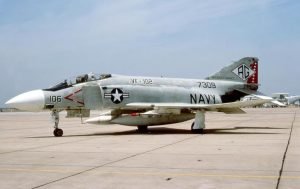 They used to say of the aerodynamically iffy F-4 Phantom fighter jet that it was proof you could make a brick fly if you pushed it hard enough. I would assert something similar about the BUFF. It’s proof you can make a railroad tank car fly if you put enough engines on it.

Let’s start with the takeoff, the indispensable Step One of flying bombers. A fully fueled and loaded B-52 has a takeoff weight “in excess of 500,000 pounds.” As in 250 tons. A railroad tanker car weighs about 270 tons—just to prove I don’t always exaggerate. 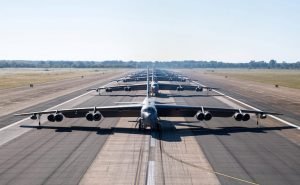 The version of the BUFF I crewed as a navigator was called the G model and it had eight Pratt & Whitney J57 jet engines. These were not the high efficiency turbofan engines of your modern jetliner. On hot days (cold air is denser and provides more thrust out the backsides of the engines), our planes utilized something called “water-injection augmentation” to shove us off the ground. This meant that 10,000 pounds of deionized water got dumped into the intakes of the engines in about 90 seconds. This is an unnatural act, I am aware.

The result was astonishing amounts of black smoke spewing out behind us. Also earsplitting rumbling that could be heard by my wife at home 11 miles away. And all this producing barely enough extra thrust to get us off the ground before running off the end of a two-mile long runway. Ahh, good times.

Wait, That’s Not All

Two other things about takeoff while flying bombers. First, the big air conditioning system on those hot and humid days supercooled the damp air getting sucked in and spewed snow onto us from the overhead vents. Actual snow. Onto my charts annotated with erasable markers. That ran in the presence of moisture. Like snow. 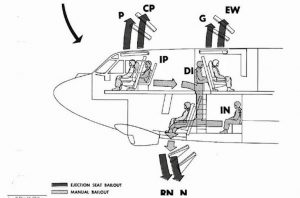 The second thing I remember rather vividly was my Standard Takeoff Position. I should point out that four of the six B-52 crew members—two pilots, a gunner, and an electronic warfare officer—sat upstairs. Yes, the B-52 is the split-level ranch of bombers. The bombardier and navigator sat downstairs in what was affectionately called The Wine Cellar.

This meant our seats ejected downward. You might think having an ejection seat hurtling you down rather than up is kind of scary. So did I. Since there’s nothing a navigator can do during takeoff, the whole point being to go really fast in a straight line, my takeoff position was ramrod straight with both hands on the ejection ring between my legs. I stayed just like that—as did my long-time bombardier, Snidely—until we cleared 250 feet. Because that was the minimum altitude at which you just might survive a downward ejection. I didn’t want to waste any time suffering if we were lower than that.

One day we went out to the aircraft for preflight. I plopped down in my seat, which per standard procedure was run all the way back and all the way up to facilitate maintenance. It turns out the “Egress Systems” mechanic had reinstalled the hatch actuator—the little explosive charges that make the ejection sequence work—incorrectly. As I ran the seat down, the frame pressed against the actuator… and blew my hatch six feet down to the concrete below me. All I remember was smelling gunpowder and seeing a twisted hatch through the smoke. Then I was out and running away from that aircraft like Usain Bolt. The pilot later told me the copilot was on intercom and said, “Hey guys, why’s the Nav running down the ramp?” This was right before they, too, smelled the smoke and joined me running down said ramp.

Meanwhile, Back in the Air…

OK, we’re still barely off the ground and this is supposed to about flying bombers. Focus.

The first event in a training flight was almost always air-to-air refueling. This looks really cool in Air Force Now videos. From down in The Wine Cellar it’s mind numbingly boring. Except for the intercom chatter.

I flew with a copilot once who used to make porn-movie fake intercourse sounds when we were getting “plugged” by the tanker aircraft. That was hilarious. It was not so hilarious when you had an inexperienced boom operator on the tanker and you heard a lot of nozzle banging along the top of your airplane. 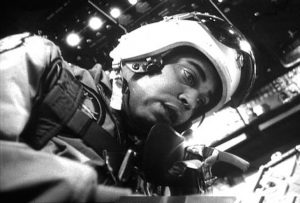 After that, we’d do a lot of practice low-level flying and bomb runs where we dropped radio tones on a tracking site and they’d score our accuracy with some FaceBook-sized algorithms. In the summertime with thermal buildup close to the ground—we flew at 400 feet—I spent bomb runs flipping switches with one hand and holding a barf bag in the other. Even after flying bombers for 1,200 hours, I never quite got over airsickness. 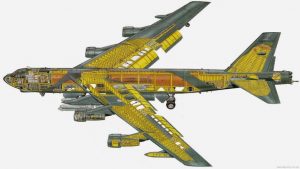 There’s an old joke about the B-52. The Air Force asked for an unlimited range, high payload bomber. Boeing came back with drawings for the B-52. The Air Force said, “Wow, this is great! But we were wondering, where does the crew go?” To which Boeing replied, “Crew? You didn’t say anything about a crew.” Gives you an idea what the accommodations were like when flying bombers.

Let me dispense with the Number One Problem first. In the ’80s, we flew all-male crews, so mechanically at least peeing was easy. The BUFF had a stand-up urinal—a 3-foot white cylinder with a flip-top lid. It was strapped to an equipment rack directly behind my ejection seat. Remembering that I never flew a B-52G younger than me, half the urinals leaked onto the aforementioned ejection hatch below my feet. When we practiced touch-and-go landings, I’d turn on my flashlight and watch the pee slosh back and forth. And if we got a urinal that didn’t leak? Did I not mention it was strapped in front of a very hot heating duct? If the urine didn’t leak onto my hatch, I got to smell simmering pee for upwards of 12 hours.

Now, the Number Two Problem. The copilot I flew with longest—I’ll call him “Co” for reasons that will become obvious—was a notorious in-flight pooper. If we flew over eight hours on a mission—which was almost all the time—the Co would have to poop. Regular as clockwork, that guy was. We ordered the gunner—the only enlisted guy on the crew—to write an additional action in his pre-flight checklist: “Copilot: Shat.” Before every flight, the gunner dutifully asked the Co if he’d pooped yet. Didn’t make a bit of difference. 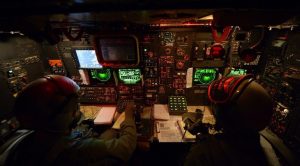 Theoretically there’s a commode in the BUFF—called the “honey bucket”—but it was mounted upstairs behind the electronic warfare officer and it was a pain to use. So the standard procedure was to take a big plastic trash bag, spread it on the deck, then step out of your flight suit and sort of squat over the bag. Problem was there was only one place in the crew cabin where you could stand up—at the base of the ladder between the two decks. So the Co would come downstairs to The Wine Cellar to do his doody. And it smelled like someone wiped feces on your upper lip and gave you a poo mustache. I mean, it was really, really nasty in the close quarters of a pressurized cabin, flying bombers at 37,000 feet.

The Co thought this was hilarious. He’d get on the intercom and say, “Copilot clearing off helmet and oxygen. Goin’ downstairs to piss off the Nav.” I was not amused, not even once. In the interest of keeping this A Family Blog, I’ll spare you the flight back from Las Vegas after the Co had eaten ten chili dogs at the Circus Circus buffet.

To get the noxious bag o’ poo out of the crew compartment, I’d open the catwalk hatchway at the back of The Wine Cellar when we were low enough to be depressurized and toss the bag on top of the forward landing gear. It would freeze when we were at high altitude, so our smell problem was solved. Of course, when you lowered the landing gear about ten miles from the runway, the frozen turd would drop onto some poor farmer’s barn roof. Or front yard. So there’s that.