Documentary Film “They Shall Not Grow Old” Q & A 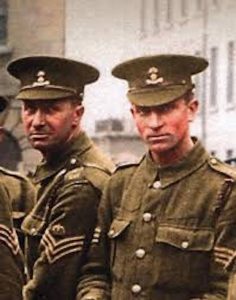 To coincide with Veterans Day weekend, and in conjunction with my presentation immediately beforehand, the Fairfield Library is offering a rare opportunity to view this masterful documentary about the First World War. I highly recommend this film and will be watching it again right along with you. Afterward, you’ll have a second chance to ask questions which I will be fielding. I look forward to a stimulating discussion.
Plan to spend the afternoon at the library and you’re guaranteed to increase your knowledge of the First World War.
Please spread the word. I hope to see you there.
From Wikipedia:
“They Shall Not Grow Old  is a 2018 documentary film directed and produced by Peter Jackson. The film was created using original footage of World War I from the Imperial War Museum‘s archives, most of it previously unseen, alongside audio from BBC and Imperial War Museum (IWM) interviews of British servicemen who fought in the conflict. Most of the footage has been colorized and transformed with modern production techniques, with the addition of sound effects and voice acting to be more evocative and feel closer to the soldiers’ actual experiences.”
From Google:
An emotionally rich documentary that wows both as a technical achievement and an unforgettable portrait of a terrible period of 20th century history. Full review
Jonathan Pile
Empire
Share
Tweet
Pin
Share