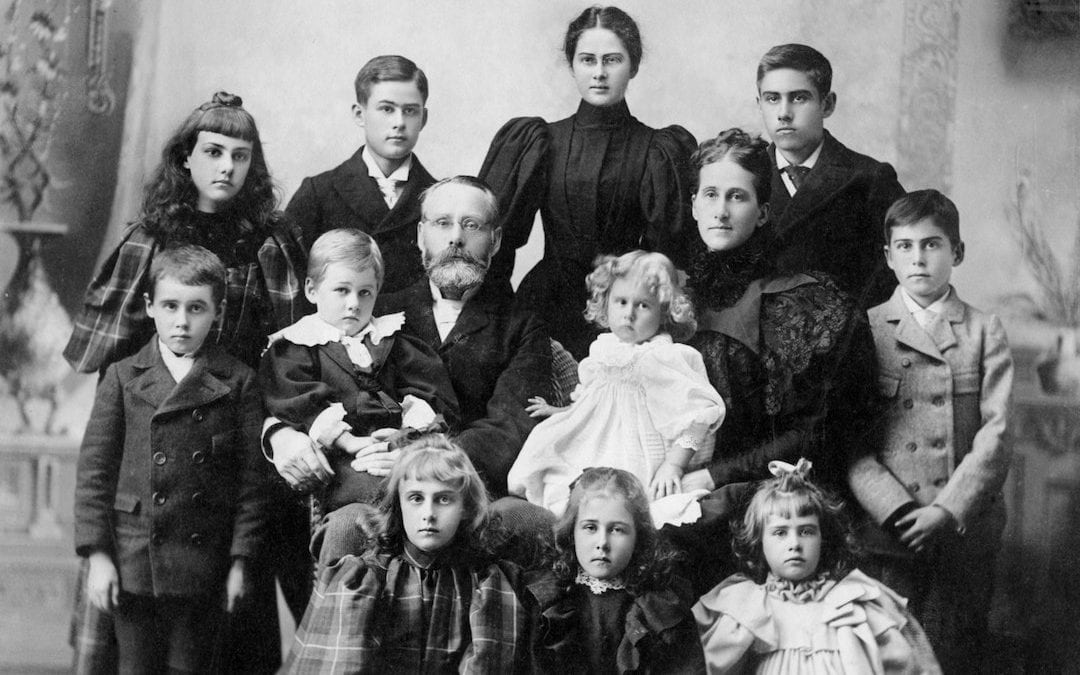 I just spent a week back in my old hometown of Skeeterville. Maybe it’s just me, but either everybody there has gotten much cooler or I’m much less of a jerk than I was in high school. I’m open to either possibility. Maybe both.

Kay-Kay—NOT a Skeetervillian, she is quick to remind, well, anybody who will listen—and I were back for Mother’s Day and my Mom’s 91st birthday, which were conveniently packaged on exactly the same day this year. Mom has worn-out knees, a gimpy hip, a bad back, poor hearing, and fading eyesight. But other than that, she’s sharp as a tack.

My son Scooter and his wife BeBe were down for the weekend and I took the opportunity to get Mom started on telling some stories from her youth in Skeeterville. Assuming she’s well rested, this takes exactly Two Leading Questions and she’s off to the races. Seriously, I can’t remember to pick up my dry cleaning and she can chapter-and-verse stuff from 1935. So I thought I’d share a few of her reminiscences, since she’s a link to a faraway time that’s fading into oblivion.

All names have been changed to protect my inheritance…

So Mom was born in 1928. There’s an adorable hand-tinted photograph of her, in which she looks shockingly like my daughter Peanut at the same age. The date on the back reads “15th of October 1929.” Mom was 17 months old… and it was exactly nine days before the stock market crashed and the Great Depression kicked off. Good times. 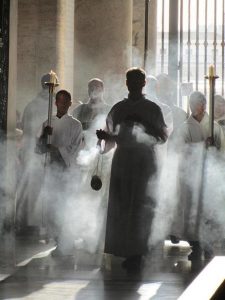 She was the product of my Grandpa’s second marriage, his first wife having died at nineteen—which was “The New Fifty” back afore World War I. His second wife, my Grandma, came from a shanty Irish family—which caused, shall we say, a slight problem. You see, Grandpa’s family had been in the US of A since 1636 and was rather, ummm, old-time Methodist. Also, they had been told by somebody somewhere that Catholics kept shotguns in the choir loft with which they shot in the back any Protestant who dared enter their church. I’m not kidding. As a result, the right side of the church was completely unpopulated at the wedding. No great loss, since they didn’t drink or dance either—which would have made them So Very Much Fun at an Irish wedding reception. 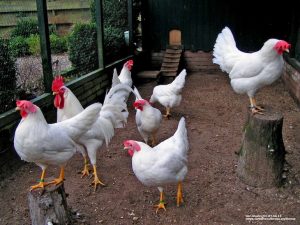 Let us say Grandpa’s resolve to marry Grandma created something of a rift with his family. So the newlyweds moved in with Grandma’s extended (Irish Catholic) family, the McGurks. The big house is still there—albeit now divided into three apartments. After my mom came along—the baby of the family—the population of this house included Great Grandpa McGurk, bachelor Great Uncle Timmy McGurk, housekeeper/cook/maiden Great Aunt Maggie McGurk, my grandmother and grandfather, a son from Grandpa’s first marriage who had been liberated from the Methodist side of the family, as well as Mom and her brother Biff, joined by a population of poultry in the backyard that varied depending on how much fried chicken Great Aunt Maggie felt like cooking. By my count, that’s eight humans + X chickens.

And the chickens bring me to one of Mom’s best stories. In addition to chickens that laid eggs and/or got panfried, Great Grandpa McGurk kept an ill-tempered rooster named Billy. Being both the youngest and the only girl, Mom was the apple of Grandpa’s eye and he took great offense to Billy the Rooster, who used to chase Mom and peck her on the bottom whenever she ventured outside. After many bouts of tears, Grandpa decided to put an end Billy’s Reign of Terror. 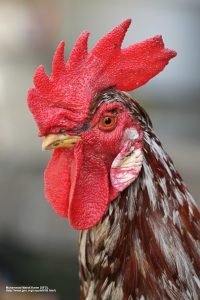 Although mighty angry at Billy, Grandpa was a man who played The Long Game. He quietly bided his time—and stuck a pie tin down the back of Mom’s underpants (OK, I made that up, but it’s so Little Rascals)—until a particularly violent thunderstorm erupted one night. While everyone else was either sleeping through or worrying their rosary beads over the storm, Grandpa headed for the backyard. He caught Billy (a feat in and of itself), wrung his neck, and then carefully staged Billy’s apparent suicide by hanging him in the latticework fence.

The next morning, Great Grandpa McGurk was stunned to find Billy the Rooster dangling from the fence. Of course, Grandpa made a big show of sharing his father-in-law’s shock, but hastened to assure him that this was common behavior among domestic fowl, who were widely known to take their own lives during extreme meteorological events. Since my Grandpa had been a farmer for like 15 minutes before his first wife died, Great Grandpa McGurk took his word on all things agricultural as Gospel.

With the unabashed success of Kill Billy, Part One, Grandpa expanded his efforts. You see, Great Grandpa McGurk was a kind of combination Outdoor Packrat/Really Bad Gardener, so The McGurk Backyard was notorious across Skeeterville. In particular, Great Grandpa McGurk had a gargantuan tumble-down arbor that sported the most inedible grapes in the county. Perhaps the entire state. Being an alleged farmer, this greatly offended my Grandpa’s sensibilities.

Relaunching his wildly successful Nocturnal Thunderstorm Gambit, Grandpa snuck out back and knocked down a section of the Offending Grape Arbor any time it rained after dark. Since Great Grandpa McGurk slept the sleep of the righteous—assisted by various amounts of whisky— he never awoke during storms. My Grandpa would then suggest at breakfast that after the terrible storm, they should inspect for property damage. Of course, Grandpa was shocked, shocked when Great Grandpa discovered some portion of the grape arbor had been blown down. It took him a good 18 months to get rid of the last of that arbor, it being the Depression with widespread drought-like conditions. And as I said, Grandpa was playing The Long Game. 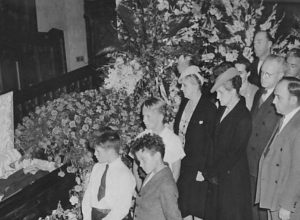 Mom says she has nothing but the fondest memories of growing up in this big extended family. They did better than most during the Depression. Great Grandpa McGurk was a retired conductor with a railroad pension and Great Uncle Timmy was a switchman on the Illinois Central, so there was steady income although they never had money to burn. Throughout the ’30s, Great Grandpa McGurk would sit in his rocker in the Back Parlor—the Front Parlor only used during clergy visits or to display the body of the dearly departed for Irish wakes—and recite to the peck or the hundredweight exactly how much coal, potatoes, and canned goods he was sitting above. This brought him a lot of comfort during those hard times. On the other hand, my Mom, says she can close her eyes to this day and still see a coffin in front of the drawn curtains of the big window in the Front Parlor. So there’s that.

There was eventual reconciliation between Grandpa and his Many Methodist Siblings. Which was a good thing. Skeeterville is a rather small town and he had eleven brothers and sisters. I mean, you at least needed to keep track of which kids belonged to whom because, well, high school dating.

After this Burying of the Hatchet—which was also Grandpa’s Plan B for Billy the Rooster—Mom got to know her father’s family. His eldest brother was known to all as Uncle Louie. Louis was not his name—I have no idea what that was—but he’d purportedly been a lieutenant in the Spanish-American War. He served as councilman of Ojibwa, the county seat, and briefly as mayor before dying of something untimely. He did, however, serve long enough to have a parking lot named after him. 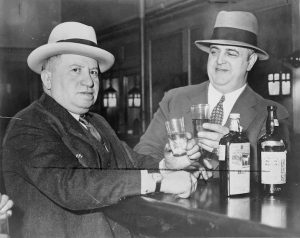 The youngest of Grandpa’s brothers was Uncle Moe. He served for something like 24 years as county treasurer, which officially didn’t pay all that well. His day job was running a cigar store in downtown Ojibwa. “Cigar store” being a flexible euphemism for “speakeasy” and/or “gambling den.” Since he did well enough to drive a big four-hole Buick and keep a wife in Skeeterville and a mistress each in the two largest towns in the county, I’m assuming he had some sketchy side hustles. Remember, he was the county TREASURER, after all. Mom swears that when Uncle Moe died—which was when I was a young boy—the family scheduled hours during the funeral home visitation for each mistress and her friends, so as not to distress Aunt Mimi unnecessarily. Not that she wasn’t well aware of their existence, but still.

Oh, and Grandpa’s brother Bert was a leader of the local Ku Klux Klan—which around that time also controlled the government of Indiana and was considered a must-join social club for White Anglo-Saxon Protestants of all varieties. As long as you were white. And Anglo-Saxon. Also Protestant. They used to hold their cross burnings on Uncle Bert’s farm just north of Skeeterville, I’m told. We drove by that farm just last week.