Care and Feeding of Characters 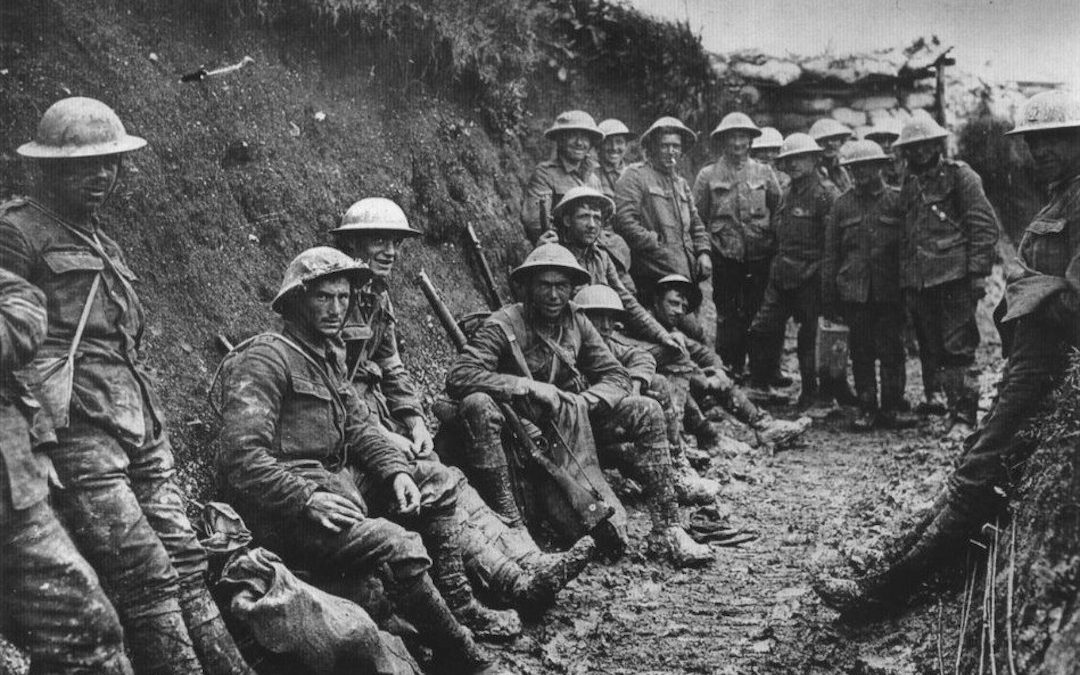 I’m still in the afterglow of the blue-ribbon win by my first novel, None of Us the Same, at last week’s writers’ conference in the Great Northwest. Let me just own up. Writers are all Sally Fields when it comes to awards—“You like me! You REALLY like me!!!” I am no exception, although I have better hair than her… unfortunate… mid-80s perm.

In addition to making me feel Very Good Indeed inside my fragile and needy writer’s skin, my recent good fortune has tempted me into saying some things about writing and how I do it. This week—characters. 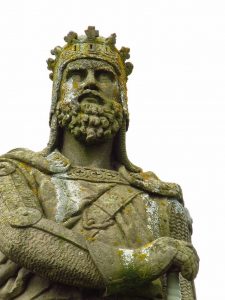 I used to finish every book I ever bought or borrowed. We’re talking one very stubborn reader here. I once finished an historical fiction trilogy about one of my favorite topics—Scotland—in one of my favorite periods—the ascendancy of (my great-x-20th grandfather!) Robert the Bruce. I knew this trilogy was, well, awful from around page 38. I mean Really Very Bad. Yet I read the remaining 800 pages and it never got any better. Crazy, right?

Since choosing to lead a writer’s life, however, I’ve valued my reading time much more. And I have given myself permission to close the cover on a bad book and forget I ever started it.

One of the sure-fire tells for me that a book is probably not worth finishing? If it contains within the first 1,000 words a rote description of the main (almost always female) character’s height, eye color, hair texture and shade, lip fullness, breast size, comeliness, shapeliness, etc., odds are 20-to-1 I’ll never finish the read.

I’ve been told by a lot of readers, reviewers, and fellow authors that I write strong, three-dimensional, believable characters that jump off the page. No comments I’ve received mean more to me than these, since I’ve been determined from the get-go to create compelling characters that drive interesting stories.

The way I go about creating characters is to let the specifics about them unfold as the story progresses. As a reader, I get much more enjoyment from a story if the author allows me to fill in most of the details about a character as the narrative progresses. It’s rather fun when well into a book the author surprises me with a nugget of physical description that either perfectly matches or completely contradicts the picture I’ve formed of a character in my mind’s eye.

This also makes for more enduring and endearing characters, I think. Let me give you an example. In the first 40 pages of Alice in Wonderland, we get exactly one overt tidbit about Alice’s appearance—that she has straight hair, not lovely curly hair like her friend Ada. That’s about it. And not much more throughout the remainder of the book. 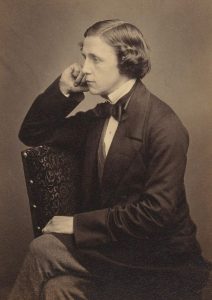 Notice two things Lewis Carroll does in withholding details of Alice’s physical appearance. First, even when he gives us the tidbit about Alice’s hair not falling in lovely ringlets like Ada’s, it’s less for the purpose of physicality than it is to reveal a little chink in the otherwise indomitably cocksure young Alice. She thinks her hair isn’t as pretty as someone else’s. It’s a lovely subtle bit of self-doubt.

Second, since we don’t know what Alice looks like from Carroll, she could look like any girl—and indeed, she could be any girl. This may go a long way to explaining the enduring popularity of this book, particularly for girls. Because Carroll hasn’t predetermined for us much about Alice’s appearance, every girl can project whatever look she wants onto the character. 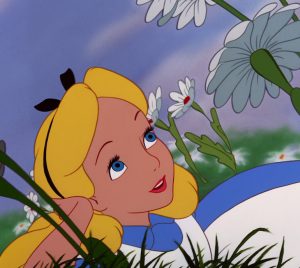 Of course, Disney messed all that up, didn’t he? I asked the students in a recent writing seminar I was teaching to describe Alice from the book Alice in Wonderland. The universal consensus was she has long blonde hair and wears a blue dress with a white pinafore. Disney’s Alice, of course. (The real Alice–Alice Liddell–who was the inspiration for Carroll’s Alice had rather shortish, straight, dark brown hair.)

My approach to characters is to lay the laundry-list of descriptors aside unless and until it’s needed for narrative purposes. That goes for personality traits and character flaws as well as physical features. If I’m writing a scene with my main character in the trenches during the First World War, what I most want to capture is the dreary sameness of the squalid setting—it’s a bunch of young men in matching itchy wool uniforms covered in mud and infested with lice. (On the other hand, if my character isn’t muddy and louse-ridden? Well, that would be an interesting thing indeed, wouldn’t it?)

Think about this from your own life experience. When you first encounter someone, did you tick off hair color, eye color, nose shape, ears, freckles, height, and shoe size? No, you may remember one or two salient features. The psychology of perception suggests that what we notice most are those features most different from our own—and these might include voice, walk, stance, laugh, or hand gestures just as readily as facial or body features. 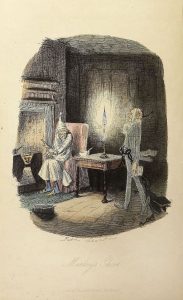 The writers I admire most stick closely to this “unfolding” approach, so I can’t claim it as some brilliant revelation. Even great authors notorious for long descriptive passages like Dickens are quite adept at this. One of my favorite bits from A Christmas Carol is Dickens describing Jacob Marley’s ghost when Scrooge first encounters him. Dickens tells us that Marley is dressed in his usual boots and breeches, even his favorite waistcoat. Then the author casually mentions that Scrooge can see the two familiar buttons on the back of Marley’s regular coat… but he’s seeing them through the familiar waistcoat—as well as Marley’s body—perfectly establishing the incorporeal nature of Marley through these homely quotidian details of his dress. Brilliant writing that.

The same goes for dominant personality traits. There’s nothing to be gained and much to be lost by saying on Page 2, “She was a stubborn woman.” It makes for much better writing and a more compelling story to show her stubbornness in lots of ways large and small throughout the narrative. A writer should always trust his readers to be wise enough in the ways of the world to come to their own conclusion of stubbornness through the words and actions/interactions of the character as she moves through the story.

This also goes for dialogue. A lot of writers feel compelled to have characters describe between quotation marks everything they’re seeing and feeling. Let’s face it, nobody we know does that. It’s not natural. I tend to overwrite dialogue in my first drafts, then I spend the next four or five drafts paring it down over and over again, whittling away everything that feels unnecessary or unnatural in my characters’ words. Dialogue is a whole heap of fun to write, but the danger of saying too much always lurks.

A lot of writers will tell you that their characters talk to them. I’ve always found that a bit precious and, well, a little creepy. They don’t really talk to us. Rather, when a character is wholly a creation of my imagination, there’s no other place to hear my character’s conversations than in my own head. But if believing that your characters are talking to you gets you through that first draft and all the painful revisions thereafter, have at it. Writing is a lonely profession, so your chances of freaking out people or getting yourself civilly committed for psychiatric observation are blessedly low. 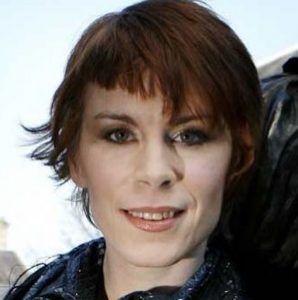 Some books are purposefully plot driven, giving the characters somewhat short shrift. This is especially true in the thriller and mystery genres. However, I boldly assert that even in these popular genres, the very best books are the ones with thoroughly developed, very complicated, subtly revealed characters. Two of my favorite current mystery writers, both Irish by 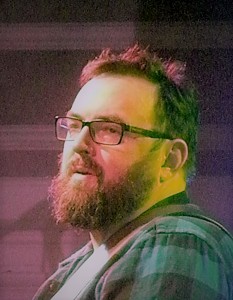 happenstance, are Tana French and Stuart Neville, both of whom are skilled at writing stunningly complex and achingly tortured main characters.

I challenge you to think of your favorite books and tell me any of them lack vivid characters. The reason for this is that books without strongly written characters just aren’t all that memorable. And I give you permission not to finish them.