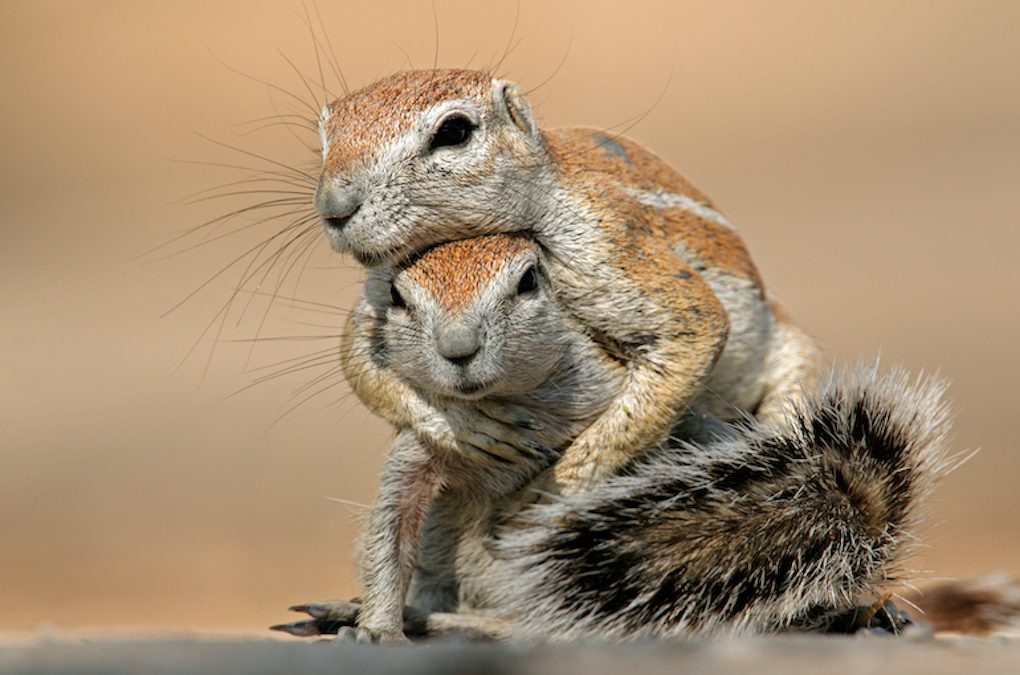 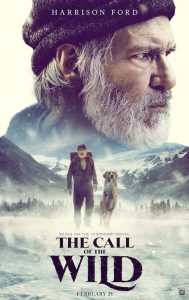 Because the world needs Another Movie Remake, Hollywood continuing to be bereft of Very Many New Ideas, The Call of the Wild (2020 version) opened in theaters everywhere a couple of days ago. This is the fifth time the beloved 1903 Jack London book has been reduced to film. Or digits.

— The 1923 silent version. Starring some guy in goofy makeup over-emoting a lot. Also, a dog.

— The 1925 first talkie version. Starring Clark Gable before he was Rhett Butler. Also the preternaturally thin Loretta Young, before she had affairs with everybody and birthed a son who would found the ‘60s psychedelic rock band, Moby Grape. [We do NOT hear enough Moby Grape in elevators or on hold. Just saying, even though this has absolutely nothing to do with The Call of the Wild. Although I would pay Big Money to see a remake with a ‘60s psychedelic rock soundtrack. Just saying, Hollywood.]

— The 1972 second talkie version. If you consider what Charlton Heston does on film talking. It certainly ain’t acting—more like chewing all that stunning scenery, very much like he did in every other performance he ever did, including Planet of the Apes and in his final acting role as President of the NRA. But this is the version I remember seeing at the Skeeterville Cinema (“It’s COOL Inside!”) when I was 12, so there’s that.

— The 1997 third talkie version. OK, this one rocked because a) it was faithful to the Jack London book, and b) it starred Rutger Hauer. Compared to prior actors in the role of John Thornton, Rutger had several advantages. These include a) being Dutch, because that’s kinda cool on it’s own, b) being voted Best Dutch Actor of the Century right after this movie came out, although I am unable to name another Dutch actor of the last century, and c) the only John Thornton portrayer who was alive during the last decade.

This last factoid changed dramatically on Friday, with the opening of the 2020 version starring Han Solo… errrr, Indiana Jones…. err, what’s his name? That guy with the car name? Yeah, Harrison Ford, that’s it. The movie also stars Some Guy as the dog. Since the dog in question is not Clifford, I’m not entirely sure how Some Guy does this. Having seen a preview, I assume it involves Large Numbers of Digits that make him look like, well, a dog. This shocks me, as I’d assumed Andy Serkis was the only person authorized by law to do this. Also, how does he act like a dog? I mean, the only Dog Things I can emulate successfully are scratching my belly and/or sleeping in the prone position. Also eating with no hands.

What I really want to talk about this week isn’t The Call of the Wild. It’s our irresistible compulsion to Call Wild Things Names. By this I don’t mean taunting moose with only one antler or insulting an opossum with a weight problem. Because they all have a weight problem. What I mean is our human habit of naming wild things outside our windows.

Full disclosure, my wife Kay-Kay is the best at this. I’m a close second. We live In The Woods and On A Lake, so we get very many opportunities to indulge ourselves in this admittedly ridiculous habit. Some days it’s like they’re loading Noah’s ark right through our backyard.

Kay-Kay and I have a long history of Naming Animals That Aren’t Actual Pets. When we were young and in love, both of us students studying abroad in Scotland, we went traveling around Europe during the holiday between Candlemas and Whistunday terms. In America, this is known as “Spring Break.” During this backpack adventure, we spent some quality time in Venice. One cannot visit Venice without encountering very, very many pigeons. So many that there are vendors selling bags of cracked corn so you can feed said pigeons, albeit mostly for photo ops. Which for you whippersnappers is the archaic term for selfies. 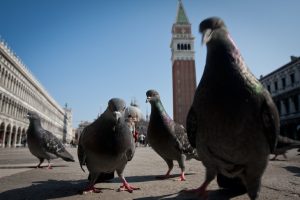 We were doing just this in Piazza San Marco one sunny February morning when a scrawny pigeon staggered over to Kay-Kay and she fed him some corn while I kept the more robust pigeons at bay. Upon closer examination, Kay-Kay discovered that the bird’s scrawniness was due to some serious skull trauma from what must have been a vicious pigeon fight. Kay-Kay, being of a scientific bent, immediately named him Lobotomy. “Awww, poor Lobotomy! Have some more corn, Lobotomy!” Not kidding.

The craziest thing is that the next day we were back in the Piazza, bought another bag of corn, and—wait for it—yes, Kay-Kay found Lobotomy again. I’ve never figured the odds on this, but they have to exceed winning a $400 million Powerball.

Over the following decade—through engagement, marriage, and the birth of three children—Kay-Kay and I would from time to time wonder aloud how Lobotomy might be faring. This is, of course, ludicrous. Keeping in mind that with an approximate bird population of one zillion, Piazza San Marco must be like Pigeon Thunderdome, making it 99.999999% certain that Lobotomy didn’t survive the month in which we’d first met him.

But we had named him, so we were invested in Lobotomy’s story. And it pleased us to imagine he might have survived, found a mate, maybe moved down the coast to Rimini and raised a few little sky rats of his own.

We’ve really gotten into the wild animal-naming racket here in Virginia. Gives us something to talk about over breakfast. I mean, we’ve been married 37 years, so Kay-Kay’s already heard even my newest material. 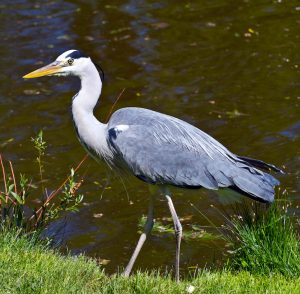 Me: “Oh, there’s Harry [a great blue heron]. Haven’t seen him [no idea what gender Harry is] for quite awhile. Wonder where he’s been?”

Kay-Kay: “Debbie and Darla [two female deer who regularly eat our ground cover] were by earlier, with a couple of friends I haven’t seen before. Let’s call them Diana and Dottie!”

Me: “Now stop that, Merle [one of exactly four squirrels our back yard oak trees can sustain]. You’re always picking on Burl!” [Being of a literary bent, I go for assonance, whereas Kay-Kay opts for simple alliteration. The other two squirrels are Pearl and Earl.]

Kay-Kay: “Ozzie and Oona [our nesting pair of ospreys] should be back soon! I wonder if climate change will keep them here over the winter soon?”

There are up to six cormorants who hang out on the deadfalls off of our dock. Since Kay-Kay insisted we give them all girlie C-names, I christened one Coretta, in honor of the Reverend Martin Luther King’s wife. The cormorants, for some inexplicable reason, are presumed all to be females, regardless of the fact there are no visible distinctions between the genders of cormorants. 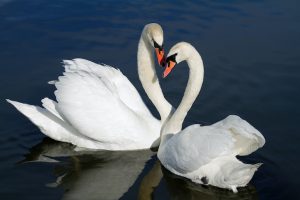 We’ve become quite close to some of our Named Wild Things. Our lake had a pair of mute swans—an invasive species, having been brought here by the English in the 17th century. Most of the neighbors called them Bonnie and Clyde. While I was away in Baghdad, Kay-Kay and her sister Jah-Jah christened them Bertie and Gertie. And so they remained in our household until Gertie’s untimely demise a few years back, joined in death the following year by Bertie, presumably from a broken heart.

We still mourn their loss, with a watercolor of the pair painted by Kay-Kay hanging in our downstairs bathroom. I miss them more for Bertie’s ruthlessly angry patrolling of our lake to keep all nefarious Canada geese away from his/our domain. He was never bothered by any other type of waterfowl, but wow did Bertie hate those Canadians. That was fine with me because Canada geese poop. A lot.

It may be because we don’t have any traditional pets now, although Kay-Kay and I are both decidedly Dog People. We always had a pooch when the kids were young, but we just don’t want the hassle of boarding or dog sitters with all the traveling we do. I suppose our named wildlife fill some of that void.

So what about your animal-naming habits? Share some stories in comments, below. Would love to read them.