Boredom on the Orient Express 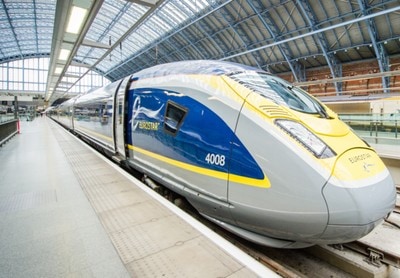 Let me start by coming clean. I really like trains. First, because train travel is not air travel. Which is increasingly miserable for those of us who can’t afford First Class, don’t have a company expense account to pay for Business Class, and/or aren’t a free-upgradeable Platinum, Gold, Silver, Bronze, Copper, Sodium, or Molybdenum status member of some airlines ‘honors’ program. And ‘honor is now defined as “not treated like a downer cow being dragged through the abattoir by its hooves.”

(For anyone who’s never seen this vintage 1970’s Southern Airlines commercial touting their one-class service, you gotta watch. It’s troublingly prophetic. Of course, one should note that Southern Airlines ceased to exist c. 1979…)

But it’s more than pain avoidance and my increasingly severe allergy to TSA x-ray machines. I’m an unapologetic and irredeemable daydreamer and there is absolutely, positively no better place for daydreaming than on a train. I’m such an accomplished daydreamer that I can zone out completely even if I’m only going four stops on a Manhattan subway. Which runs underground, lest we forget. In fact, I’ve been known, shall we say, On More Than One Occasion to turn that four-stop subway ride into an unplanned excursion to White Plains, which I admit is not a particularly conducive spot for daydreaming.

Passenger trains, however, take daydreaming to a stratospherically higher level. There’s such a hypnotic, zen-like quality to watching endless stretches of landscape slide by a big window. Even at night, watching lights in the distance move past is mesmerizing. This is enhanced by the rhythmic clack-clack of steel wheels passing over expansion joints, with the occasional kachunk-rattle-rattle when passing a switch or siding, just to snap you out of your trance for a second before you fade away again. Ahhhh… Sadly, high-speed trains require much smoother tracks and just don’t have the same back-beat melody of Old School Trains. But they’re still trains and incomparable places for daydreaming.

The United States used to have a love affair with trains. For anyone who still may believe that Government supporting corporations is a new thing, well, the three transcontinental railways would never have been built without massive subsidies from the U.S. Government in the 19th century. For non-fiction readers, I highly recommend Richard White’s book, Railroaded. (Among other things, you’ll be dumfounded how a complete dolt like Leland Stanford, Sr. managed to make a big enough fortune to endow an entire university and name it after Leland, Jr.) Much of how we see ourselves as a people is tangled up with the railroads rolling West, opening up the plains to settlement, bringing cattle from the fabled ranches to Chicago for butchering, and conquering the Rockies with their vast mineral wealth.

Something happened after World War II, probably the confluence of lots of cars, cheap gas, and the Interstate Highway System. We fell out of love with our trains. I’m just old enough to remember riding passenger trains that weren’t Amtrak. My little home town of 16,000 souls had SEVEN rail lines running through it.

One of the most vivid childhood memories I have—really a composite of many memories—is lying in bed on summer nights with the windows thrown open, listening to the keening of train horns every ten or fifteen minutes, sometimes well into the night. Having been bit by the wanderlust bug at a young age, those mournful-yet-hopeful sounds of trains leaving—and I always thought of them as leaving—held for me a deep promise of escape for myself someday.

We used to take the Santa Fe passenger service into Chicago 100 miles away to go shopping or visit the museums or catch a ball game—you could go for the day, with a dozen trains from which to choose. As with air travel at the time, we used to dress up to take the train. It was wonderful. Then the passenger trains cratered and Amtrak was created and the rest is a history of steady decline.

The only part of the American train system that makes money today is the Northeast Corridor. We have one high-seed train route, the DC-to-Boston via Philly and NYC Acela, but it’s a poor excuse. “High speed” on Acela is 150 mph… on exactly 28 miles of its 456 mile route. That means it’s at top speed for exactly 11.2 minutes. By way of comparison, the extensive Chinese high-speed rail system has 1,400 miles of track with a top speed of 217 mph. Which is just 10% of the 14,000 total miles of track dedicated solely to passenger train use.

To quote someone who might actually be able to do something about this, “Sad!”

I’ve taken some long train rides in my time, too. Not all of them were actually all that great, truth be told.

As a 3-year-old, my parents packed us onto a passenger train for a trip from Chicago to Los Angeles and back. I don’t remember any of it, but according to family lore it was an ill-fated journey. My Mom sliced open her hand peeling an apple, but a doctor on board stitched her up in the dining car kitchen. When we got back home in early January, the furnace had been out since the day after we left and all the pipes froze and burst. We had to move in with my grandparents while the plumbing was gutted and replaced. While we were staying there, my grandfather died. So that was not a Great Rail Journey, although to my way of thinking it wasn’t the train’s fault.

When Kay-Kay and I were college students in the UK, we decided it would be a Really Cool Thing to jump a passenger train from Venice to Athens—a remnant of the old Orient Express route! Trouble was, most of the intervening territory was Yugoslavia. And the last third was Greece, which was a rather undeveloped country at the time. The trip took 39 hours. Each way. In second class.

That trip was memorable nonetheless. I was jacked up by a Yugoslav Border Guard With Attitude at 2 AM, shoved off the train onto the gravel track bed. That was special. We had some guys ask if they could smuggle new Italian jeans to Belgrade in our backpacks. We declined. We shared a compartment with some Yugoslav guys who brought along some really stinky country sausage and really smelly feet. But they were jovial and shared their sausage with us. They knew two phrases in English: “American football” and “Muhammed Ali.” The second is, I suppose, technically Arabic. We knew exactly zero words in Serbo-Coratian. We all smoked at the time, which was convenient, so we shared cigarettes. Ours were decidedly better.

This was an earlier age of travel and communications, to be sure. To illustrate, when we peeled ourselves from our seats in Athens, wanting only hot food and hotter showers, it was early on a Sunday morning. Turns out while we were on our 39-hour sojourn, John Hinckley had shot Ronald Reagan. 7 AM in Athens—in 1981—was not the best time to find any news in English or many people who spoke English. The Greeks, however, are very friendly and wanted to share in our presumed adversity, so barraged us with cries of “Ronald Reagan” and pantomime assassination gestures which led us to believe he’d either been stabbed or had a heart attack. When we found a cafe with a TV, all we saw was Reagan being bundled into a limo and an excited Greek voice over. We had to wait several hours until the International Herald Tribune hit the news kiosks to find out the President was alive.

Seems to me a great shame the US doesn’t care much about trains anymore. You meet a lot of interesting people from all walks of life. A few of them are even sober. Trains don’t feel the need to cram you into a human mailing tube, cheek by jowl, like airlines. There aren’t any seat belts and the bathrooms are kinda big. The security is much looser and old train stations are cool and romantic places, not the sensory overload experimentation chambers all airports have become.

Do you have any train stories to share? Are passenger trains something we should invest in as a national policy? Would you take trains rather than fly if there was better and more frequent service, like in Europe? Or is a passenger rail system a big waste of money in 2017?