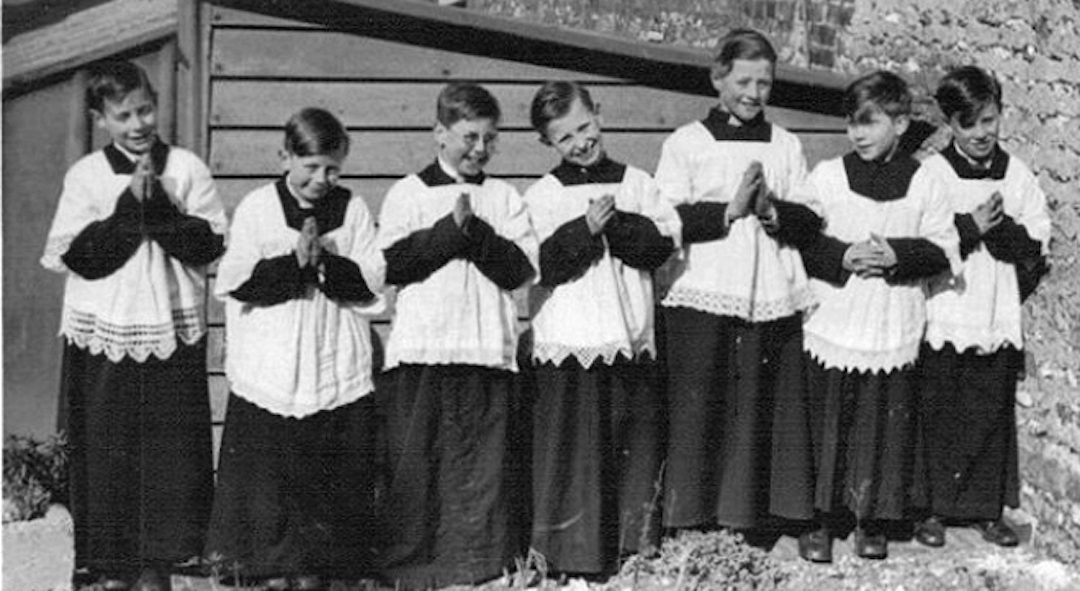 Considering the seriousness of many of my posts, I thought this week I’d address something less weighty while sticking to the general theme of Confession Is Good for the Soul. I am a recovering… Catholic altar boy.

Catholic Daze of My Youth 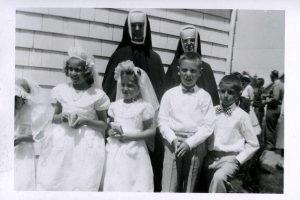 Being raised in a Catholic family in the ‘60s, I regularly attended Mass. I recall this mostly as dragooning by my mother. Particularly the dressing up in polyesters and the slicking down of hair with Brylcreem. But my darkest secret is that from circa 1969 – 1972, I actively participated in The Show.

In my hometown of Skeeterville, I attended a Catholic school through the 8th grade. Although after Many Years of Legal Education I now know this to have been hideously unconstitutional, we split our 7th and 8th grade school days between St. Anywhere Elsewhere and the public junior high school for math, science, PE and shop. These were the expensive classes. All those Erlenmeyer flasks and wood lathes. Our non-tuition-charging religious school was woefully underfunded. It therefore excelled in those disciplines requiring only paper, chalk, and ruler whacks. 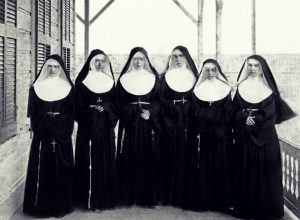 For half of us, one of the biggest rights of passage came at age 10—becoming an altar boy. Most boys “volunteered,” although I use that term facetiously. You have never been strong armed until you’ve felt the pressure to conform from the combined forces of an extended Irish-Catholic Matriarchy and a Very Scary Squad of Nuns. The latter of which may explain my unnatural adult fear of penguins and tuxedos.

We had a kind of altar boy boot camp, which wasn’t all that bad. It got us out of class for an hour a day for a few weeks. We also got to eat lots of unconsecrated communion wafers. I’m not entirely sure what the training purpose of that was. I’m guessing the Altar & Rosary Society was unloading the stale ones. Although how one would tell a stale communion wafer from a fresh one is beyond me.

Once we were trained up, we were put on the Mass schedule. Do not for one moment delude yourself into thinking we newbies got put on the SUNDAY Mass schedule. This was an organization that had 20 centuries to perfect hierarchy. We new altar boys started with the Weekday Masses. 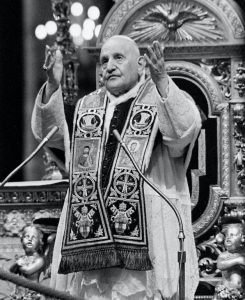 Back in the day—meaning the interstitial period between the liberalizations of Vatican II and large numbers of priests dying off without replacements—my parish had three full-time priests and one or two “in residence” who still said Mass regularly. We had the clerical manpower to pull off THREE daily masses: 6:30, 7:15 and 8:00. In the AM I’m talking about—three Masses before school even started. And we New Guys got the Oh-Dark-Thirty showtimes, not the cushy 8:00 o’clocker.

One of the in-residence priests we had at the time had, shall I say, a bit of a tippling problem. If you drew Father O’Lush for the 6:30, it was something. One of our jobs was pouring wine and water from big glass cruets into the chalice during the Offertory part of The Show. This particular priest kept nudging the chalice until we poured out the entire contents of the wine cruet. When the time came, he would down that third-bottle of wine like it was a shot of Rock and Rye. I recall one morning when he choked, spewing claret across four white surplices. We looked like choir boys who’d barely survived a drive-by.

You learned all the tricks of the trade from the older boys. Father Hogan went for white wine, not red. People gagged a little getting communion from Monsignor O’Fallon, a chain smoker with yellow nicotine stains extending past two knuckles on his host-distributing hand. If you rubbed your feet on the wool carpet, you could give girls you liked a big static shock by touching their chins with the metal paten you held. It was only much later we discovered this was not a particularly good way to get any Action With the Ladies. 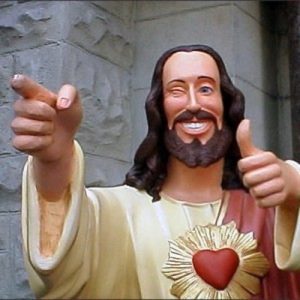 As we aged within the Altar Boy Club, we moved up the ranks and got that sweet 8:00 o’clock weekday gig and started pulling one of the earlier of the five Sunday Masses, too. Most importantly, when you hit 6th grade, the real gravy train arrived. The 6th grade altar boys got all the funerals.

Now this may sound morbid, but we loved funerals. The preeminent reason for this was that weekday funerals were all scheduled for 11:00 AM. This somber duty thereby got us out of Miss Demarest’s (fictitious name—I still fear her from the grave) Spelling class. Miss D was wholly unqualified to be a teacher, but she had that certain something Catholic schools coveted—the ability to run a tight ship by terrorizing all those in her care into meekest submission. She was under five feet tall, almost the same wide, with a withering stare that could shrivel the testicles of even the most cocksure early adolescent lad. She was… formidable.

So we 6th graders would sit at home every morning waiting with bated breath over our Pop-Tarts and Eggos (both innovative new food products!) for the Skeeterville morning obituaries on our local radio station, WIZZ. We wished as hard as we could for each obit to end with, “… services will be held at Immaculate Conception church on Thursday at 11:00.” Sweeeet… 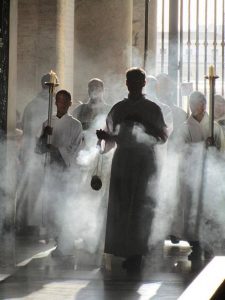 The funeral Mass was hilarious . One of my regular crew had the ability to break wind on demand, for example, and always seemed to have eaten chili the previous evening. This was an awesome and unrivaled skill among 12-year-olds. It was also common knowledge that I was somewhat allergic to church incense, which is wretched stuff that smells like burning pine tar to me. My comrades always made sure I was the second one out to the altar, since that’s the guy who had to carry the censer—that big metal thingy that held the charcoal onto which you sprinkled the granules of incense—as the priest did all his praying-around-the-body stuff. I would wheeze a lot and my eyes would swell up like I was crying. In hindsight, it must have been a stunning effect.

Two of us would also get the nod to ride with the priest to the cemetery for the graveside segment of the morning’s entertainment, basically for esthetics since all we did was hold his prayer book or a stainless bucket of holy water with that sprinkly mallet-shaped thing. This was the best, since sometimes the family would slip us each a few bucks. You know, for the effort.

Italian funerals—we Irish let them into our parish after WWI, for reasons lost in the mists of time—were the greatest graveside shows. Often part of the schtick included the widow screaming she couldn’t go on and making to throw herself into the grave on top of her dear departed marito. The Men of the Family were duty bound to make a show of restraining her and begging her to go on, for the grandchildren’s sake or whatever. One time, after several days of rain, the widow got a little too close and slipped on the muddy edge of the grave—and had her wish realized. This was quickly followed by a notably ungrief-stricken bellow, “Get me the hell out of this goddamn grave!” 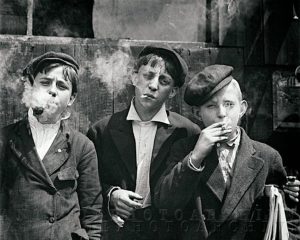 By the end of 8th grade most of us had outgrown the altar boy gig, with thoughts turning to more carnal matters involving 8th-grade girls. Some had already been turfed out by the pastor for misbehavior. Three of my brother’s classmates were defrocked after being caught under the rectory porch, having stolen a bottle of sacramental wine and a pack of the pastor’s unfiltered Pall Malls. Most of us just drifted away, with great showy sighs from our mothers.

I’m not a church-going guy anymore—weddings and funerals are about it. I can still mumble along with a Catholic service, just to be polite. Still, I did a lot of growing up with my altar boy crew. One of them died almost twenty years ago and I’ve long since lost contact with the others. I hope we share a few memories of that pivotal time in our lives when we were just starting to turn away from childish things, back before any of us had mortgages or marriages or surly kids of our own.