An Utterly Unreliable History of the Olympics

My personal history with the Olympics can be summarized as, “Geez, I’m four years older again already?” Yet I adore them, in both Summer and Winter flavors. It’s once again time for my quadrennial startling rediscovery that I know how platform diving is scored or that watching curling is as addictive as eating Pringles. 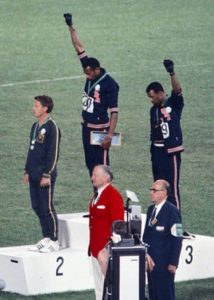 The very first Olympics of which I have reliable memories are the 1968 Summer Games in Mexico City. I would’ve been eight-and-change years old. The one vivid memory I have is the protest by American 200-meter sprinters Tommie Smith and John Carlos on the podium during the “Star-Spangled Banner.” I saw it live, but it’s only stuck because of the immediate kerfuffle this caused inside my house, rippling outward across the entire nation by morning.

I didn’t remember until Googling for this post that Smith and Carlos also stood on the podium shoeless in black socks, in solidarity with poor Blacks. Or that Carlos had his track suit unzipped to show solidarity with blue-collar workers. Or that the silver medalist, Australian Peter Norman, wore an Olympic Project for Human Rights badge in solidarity with the Americans.

Memory is a funny thing.

Then There Was Munich 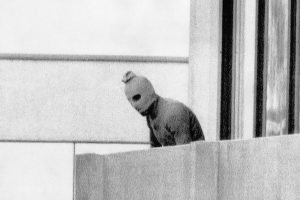 I became an Olympics aficionado in 1972. The Munich Summer Games taught me two names I had never before encountered—Olga Korbut and Black September. The former stole all our hearts in gymnastics. The latter killed eleven members of the Israeli Olympic team in a terrorist hostage-taking attack. 1972 was also the year of Mark Spitz, who won a chestful of gold medals and single-handedly made swimming a Very Cool Sport.

But for me, ’72 was Olga and her pigtails. I was 12 years old and of an age when girls were suddenly less contaminated by cooties. And there was Olga. 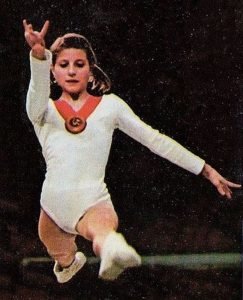 She wasn’t the powerhouse contender of the vaunted Soviet Women’s gymnastic team. That was the flawless Ludmilla Tourischeva, a comrade who competed with ice water in her veins. But there was something alluring about Olga and her wide, crooked smile. She lost to Tourischeva in the Individual All-Around, even though she won gold in the balance beam and floor exercise, plus a silver in the unevens.

Team USA wasn’t even a factor. 1972 belonged to the Communist Bloc women with their exotic names and 5-Year Plan precision. The team competition winners were a Warsaw Pact summit—USSR, East Germany, and Hungary. They were entrancing. Also more than a little frightening to a pubescent boy.

The 1970s was decidedly my formative Olympics Decade. It was also the decade dominated by the Soviets and Eastern Europeans. This went way beyond Olga and her tovarishchi in Munich. 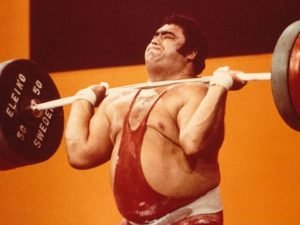 There were, for example, the weightlifters. And by this I mean Alekseyev. Although I was always entranced by how he could heft a barbell past his ponderous belly, Vasily Alekseyev was a construction crane in a red onesie. He set 80 world records during his undisputed reign as World’s Strongest Man from 1970 to his ignoble defeat in the 1980 Summer Games. What I most remember was his completely emotionless demeanor when he approached a barbell with, say, a gajillion kilos on it. Cool as a cucumber sandwich, that Russki.

The Communist Bloc dominated so many events, winter and summer. Shooting, wrestling, volleyball, biathlon, luge, speed skating, rowing, figure skating, pentathlon. In 1988, the last Olympics before the Fall of the Wall, the Soviets led the medal count with 132. Second place was little East Germany with 102. The USA? Just 94. Of the ten top medal counts, six were owned by Communist countries. Bulgaria finished well ahead of France, Italy, and the UK. With a population of 9 million. 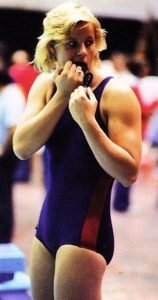 I would be remiss if I failed to mention the significant emotional impact made upon my teenage psyche by East German women swimmers. Of course, we didn’t know at the time that the entire East German team embraced Better Swimming Through Chemistry. I guess we should have suspected something.

Kornelia Ender is the poster child here. She was untouchable in 1976, winning four individual gold medals with a world-record time in each. When she was on the starting block, her back was so broad, she looked like a longshoreman in a one-piece. Even speaking in German, you could tell she had a disturbingly low voice. Yeah, they were juicing her big time, although Ender still maintains she never knew what team doctors were giving her.

The 1980 Winter Olympics at Lake Placid were OK, but the 1980 Summer Olympics was unwatchable. Recall that the USA and 64 other countries had boycotted the Moscow Games in retaliation for the Soviet Union’s invasion of… Afghanistan.

Let us pause to acknowledge the cosmic irony of this. 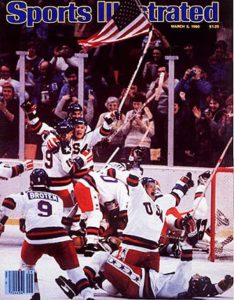 To be honest, the only truly memorable thing from the entire 1980 Olympic year was the Miracle on Ice. A ragtag bunch of American weekend and college players managed—still not clear how—to upend the vaunted Soviet team. This hockey juggernaut was comprised entirely of Red Army players, who spent much more time practicing their slap shots than on the rifle range. They were an entire side of high-speed Dolf Lundgrens from Rocky II.

In 1984, the Soviets led a pay-back boycott of the American Capitalist-Fascist Los Angeles Summer Olympics, making it just as unmemorable as 1980. Although it was the debut year for synchronized swimming as an Olympic sport. This allowed ABC to hire Esther Williams as a color commentator. OK, so there was that.

But the Winter Games were in Sarajevo. This was the lovely old Austro-Hungarian city picturesquely (geographically) situated in the mountains of peculiarly (geopolitically) situated Yugoslavia. Having been sniped at and made to Feel Very Unwelcome as a peacekeeper in Sarajevo 15 years later, let me acknowledge yet more cosmic irony. 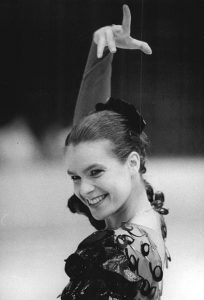 One thing stands out for me from the Sarajevo Games. And that would be Katarina Witt. She was one of the East Germans who competed with near-robotic perfection. But she was graceful and sigh-inducing lovely. She also went on to dominate figure skating for the entire decade of the ’80s.

I was married by then, but Kay-Kay generously allowed me to man-crush on Katarina, since she figured the odds of my ever actually meeting her were less than hitting the Powerball. Twice in a row. Coincidentally, while living in the Washington area two decades later, I randomly discovered Katarina Witt was residing across town in an expensive apartment at The Watergate. I only briefly considered stalking her.

Since the demise of the Soviet Empire and the dismantling of the East German Pharmaceutical-Sports Industrial Complex, the Olympics have become more egalitarian and less Cold-War terrifying. We no longer have to fear nuclear annihilation or suspiciously over-muscular junge Frau. 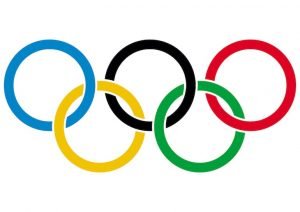 Of course, this also means the USA is back at the top of the medal table, with the Chinese now our big competition. A lot more countries medal now, however, making room for a broader base of competition.

Some small countries have carved out niches of excellence. Cuba in boxing, Jamaica in sprints, Hungary in water polo, Kenya in distance running, and South Korea in archery are all good examples. That keeps things interesting and allows for hearing some new anthems played on the podiums.

It’s amazing when I think about it. After a four-year hiatus, I can get genuinely excited about watching springboard diving or winter biathlon. I mean, I never watch 90% of these sports between quadrennial Olympiads. I don’t read about them or seek them out on the hundreds of cable channels to which I mysteriously have subscriptions. 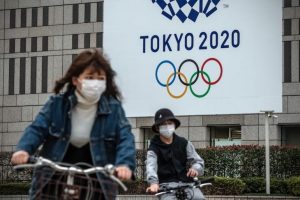 As ill-advised as they may be in this Time of COVID, the Tokyo Games are cranking up this Friday. Kay-Kay and I will be watching, without a doubt. As much as we scoff at the over-commercialization or bemoan the professionalization, there is still something very special about the Olympic Games.

And what’s wrong with the world gathering once every four years for the sake of sport? Sure, the Olympics has long been co-opted—sometimes lethally—for political purposes. That’s regrettable to be sure. But the gooey-chewy delicious center of the lovely confection that is an Olympic Games is still athletic competition. More importantly, it’s the striving of individuals—alone or in teams—for that fleeting bubble of perfection that is always just a little beyond their reach. This doesn’t apply to Simone Biles, goes without saying.

There’s something wonderfully, courageously, vulnerably, admirably human about that.