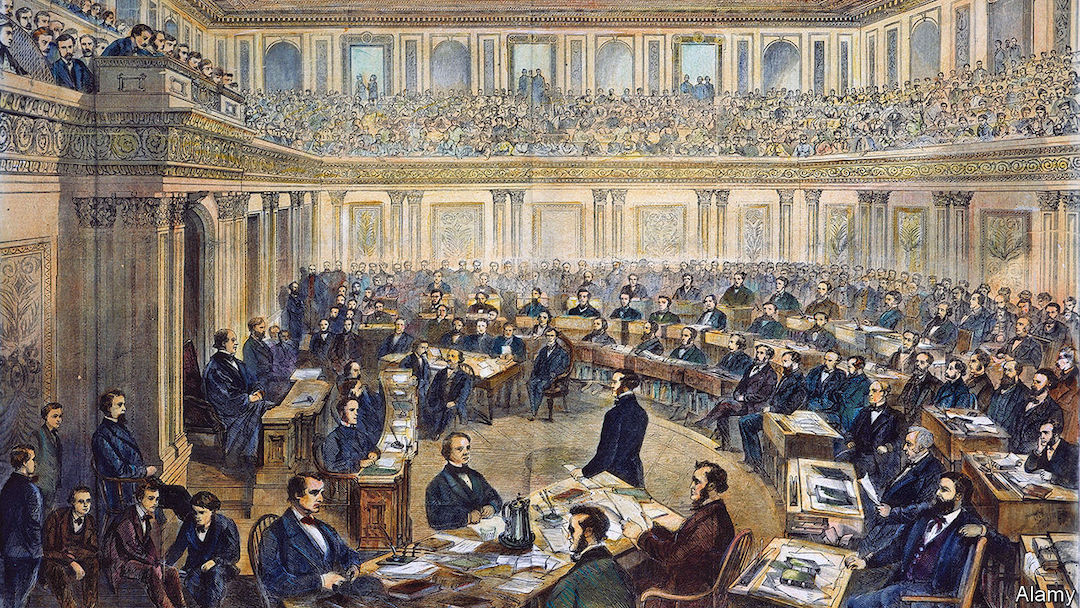 You see how I hoodwinked you into reading this blog with a pretentiously worded French title? You thought this was going to be some hilarious deep dive into the literature of Marcel Proust, didn’t you? But what it says is “in search of past impeachments.” Well, actually it says, “In search of past peachy things,” mostly because impeachment in French is actually mise en accusation and that isn’t very funny-sounding. Kind of like “Buick Skylark” sounds innately fun, whereas “Ford F-100” does not.

But now that I’ve got you here under false pretenses—which may in itself be a Comment on Current Events—let’s talk Old School Impeachments.

I shall refrain from writing about the Current Impeachment Unpleasantness, since this blog is meant to be a Politics-Free Zone. However, that prohibition does not make this a History-Free Zone. Like at least half of the three or four people who regularly read this blog, I’ve lived through two Impeachment Processes—one consummated (Clinton) and one impeachus interruptus (Nixon). 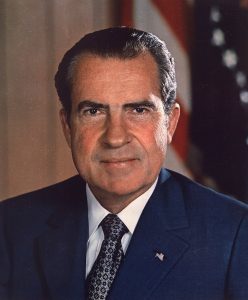 Richard Milhous Nixon was our 37th President, elected to office in 1968 as the nation smoldered after a summer of rage and riot. I use his full name only because “Milhous” is  hilarious, unlike Jimmy Carter’s titter-proof “Earl.” And Nixon had to get his laughs where he could, being the Most Humorless Man ever to occupy the White House, with the possible exception of Calvin Coolidge, despite his remarkably funny name.

When the Nixon impeachment inquiry opened in the House of Representatives in February of 1974, I had just turned 14, but I was the youngest of four siblings, two of which were old enough to be hippies and anti-war/anti-Nixon protesters, so I was more politically amped-up than your average young teenager.

Let’s review the bidding. Paranoid Nixon—who would have beaten any Democrat in 1972, let alone the hapless George McGovern—had a bunch of dirty-trickster goons working on his campaign who were incapable of pulling off a simple hotel burglary without getting caught. There were Cuban émigrés, a lying Attorney General with a drunk-dialing wife, a safe full of laundered money, yadda, yadda, yadda. But as always happens, in the end it wasn’t the crimes, it was the coverup that got Nixon. Oh, and like a gazillion hours of audio tapes the Knucklehead-in-Chief made of himself ordering said coverup. If they’d thought of it in 1974, somebody would have done a mike drop once the tapes were discovered. 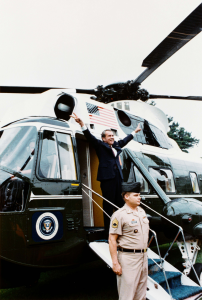 When articles of impeachment were voted out of the Judiciary Committee at the end of July, Nixon’s support in Congress evaporated like a guy “heading to the men’s room” on a bad blind date. Sen. Barry Goldwater—a man who knew something about colossal defeats—told Nixon that there were no more than 15 GOP Senators left who might vote with Nixon in the Senate. So Mr. Nixon did the first and last decent thing of his entire political career and resigned.

I have many memories of this time, but perhaps the most vivid was how The Watergate Hearings in the Senate, chaired by the slow-drawling and avuncular Sam Ervin of North Carolina, put the Public Broadcasting System on the nation’s television map. Prior to Watergate, PBS was merely Channel 11 on my television dial, whose only purpose was to impede my switching between Cubs’ games on Channel 9 and Honeymooners reruns on Channel 13. But Watergate was must-see TV—and Sam Ervin was hugely entertaining, as were the upper-lip-sweating John Dean and the crew-cutted H.R. Haldeman. I would actually run home from high school to watch a few hours each day. 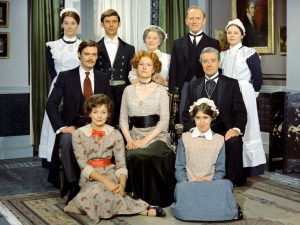 I am to this day eternally grateful to the Watergate Hearings for introducing me to PBS, where I discovered Upstairs Downstairs (the proto-Downtown Abbey, for you younger readers) and I, Claudius (in which they regularly showed actual naked breasts, which was a big plus for a teenage boy in the pre-HBO Era).

Also, I have two salient post-Watergate related memories. First, my wife Kay-Kay and I had a very enjoyable half-hour chat with George McGovern when, still kinda hapless, he showed up for a play at the National Theatre in Washington thinking it started an hour earlier than it did. The only other people in Washington equally as hapless were… me and Kay-Kay. So there were the three of us, looking rather sheepish, chatting away in the lobby. I remember talking bombers (him WWII B-24s, me Cold War B-52s) and his being exceptionally charming to Kay-Kay. He had a wonderful smile, too.

My second collateral memory is more substantial. One member of the House Judiciary Committee who drafted and voted out the articles of impeachment against Nixon was Fr. Robert Drinan, a Jesuit priest and former dean of Boston College Law School who was representing the Massachusetts 2nd Congressional district. Fr. Bob served 10 years before Pope John Paul II ordered all priests out of elected office. He then retreated to the faculty at Georgetown Law School five blocks from the Capitol, so as to keep an eye on things. 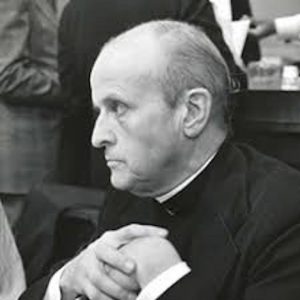 Fr. Bob was one of my professors when I was a student at G’town. (Go Hoyas!) I had him for International Human Rights, which was squarely in his wheelhouse having fought for human rights in Chile and Argentina, as well as leading the effort to allow refuseniks in the Soviet Union to emigrate. He was a force of nature when lecturing, leaping up and down the levels of the tiered lecture hall. One day, he was so wound up that when a woman raised her hand to ask a question, he bounded over to her, dropped to his knees with elbows on her desktop, and nearly shouted, “Yes? YES???” I was sitting behind her—she let out a little shriek, stammered a few fearful words, then burst into tears.

He was a remarkable man and remained a mentor of mine right up until his death in 2007. I attended his wake and sobbed my eyes out. I miss him to this day.

When Bill Clinton was impeached, I was again living in Washington, D.C. This time, I was working in Air Force International Law Division in The Pentagon. It was sort of weird. Being uniformed military officers, we weren’t exactly encouraged to speak our minds on the subject of the Commander-in-Chief’s misbehavior, but there were a lot of furtive discussions behind closed doors while we were Inside The Building. Of course, like everybody else in DC, the impeachment was all we talked about off duty. 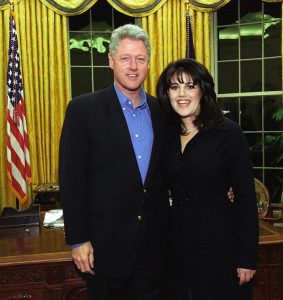 The Clinton case was very different than Nixon’s. Watergate was an extravagant, multi-tiered and multi-layered confection of criminality, drizzled with sticky corruption. There was something for everybody to hate about Nixon and his band of liars and crooks. The Clinton case was, as James Carville famously said, nothin’ but sex lies. Seriously, how uninspired—Middle-Aged Crisis Guy diddles Star-Struck 21-Year-Old and lies to hide the embarrassing facts from his wife and, well, everybody else in the world. <Yawn>

What jacked my jaw and most people’s who supported Clinton was that Bill convinced all the people around him, including his Cabinet and his wife, to go out and (unbeknownst to them) lie for him publicly. That was a truly odious breach of trust. But that wasn’t one of the articles of impeachment.

In the end, the whole mess collapsed under the weight of its sheer tawdriness (e.g., the stained blue Gap dress, everything about Linda Tripp) and Clinton served out the rest of his second term as a Very Popular President. I was routinely working on inter-agency teams at that time and I don’t remember the subject ever coming up again other than in off-color jokes. We had jobs to do, like bomb Kosovo three months later. Clinton was still the boss, and that was OK by most of us. 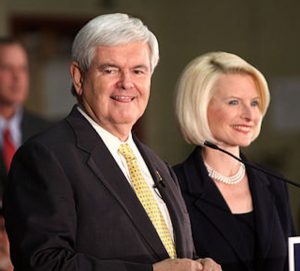 Curiously, the ones who really suffered as a result of the Clinton impeachment and trial were the people behind it. The Special Counsel, Ken Starr, became a joke in the legal community. Newt Gingrich, the guy most behind the impeachment effort as Speaker of the House, resigned from Congress in the middle of the impeachment process due to the electoral drubbing the GOP took that November. It was only later we found out Newt was carrying on an illicit affair with one of his own Very Young Staffers, thereby redefining “hypocrisy.” His successor as Speaker, Bob Livingston, lasted less than a month before he was forced to resign due to his own Zipper Problems.

All in all, by the end of the Clinton-Lewinsky Saga, most of us just felt tired and in need of a long shower.